… having a hysterectomy.  At least not my hysterectomy.  In fact, neither dysmenorrhea nor post-op hysterectomy pain comes close to the pain I experienced mid-afternoon Wednesday, October 1st, 2014 — AKA  the day from HELL.

I Googled it and yep, dental pain is the worst pain.  Apparently numerous women who have given birth to multiple children (not more multiple births through the vaginal canal at the same time, e.g. twins, triplets, octoplets) say that ondontalgia is the worst pain they have ever experienced.

I had a temporary over a molar undergoing treatment for a permanent crown.  I like the word crown better than cap even though they mean the same thing … cap sounds like some crappy hat you put on your head, while crown implies royalty! 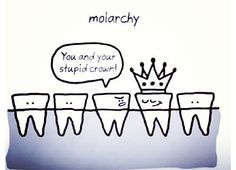 Yes, I was a bad patient, chewed some gum causing the temporary crown to come off which made me almost swallow the gum-engulfed crown!  It was sugarless gum though (just so you know I’m not that bad of a patient).  I then took a sip of water without the temporary crown in place — I thought I was going to pass out!  Holy f*ck — mother of gawd!

The pain was worse than the time my husband closed the car trunk on my head and I saw STARS.

This is such a cool gif / image … I hope you don’t end up staring at it all day and can read the rest of this post!  But if you do get stuck here ENJOY!

I never knew that tooth pain could be so bad.  It felt like an icepick going up from my left upper jaw through my ear canal and piercing my skull.  I shrieked.  I cried.  I lost all sense of pride and humility.  I was at work, clocked out sobbing and drove IMMEDIATELY to my dentist’s office.

Yes, I was that horrible @sshole tailgating you as I drove like a mad person to my dentist, impatiently waiting and creeping up to every red light contemplating running each one … time never moved so slowly as the tears ran down my face.  I’m sorry, but honestly I was out of my mind in pain.  Somehow I obeyed every stop sign and every stop light never going 5 mph above the speed limit (the cars in front of me and the stop signs actually permitted law-breaking) although the pain tempted me to be traffic disobedient!  I imagined a worst case scenario of clipping a person on a bike or getting a  traffic ticket all delaying the care of the this dental demon!  I made it to my dentist’s office as they were expecting me and my pain, giving me the sad news my nerve root was dying. 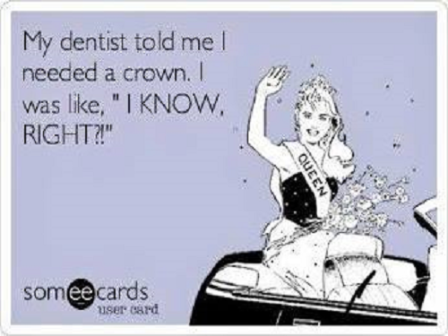 I actually thought my nerve root was trying to relocate into my brain … either that or some person was piercing a voodoo doll of me with the largest needle on earth!

This pain was so bad I actually gagged.  I had no idea that pain could make you feel like barfing.  If someone had said, “I have a gun, would you like me to kill you?” I’m sure I would have said yes.  Now I know why evil people use pain as torture … even using pliers to pluck teeth out one by one! 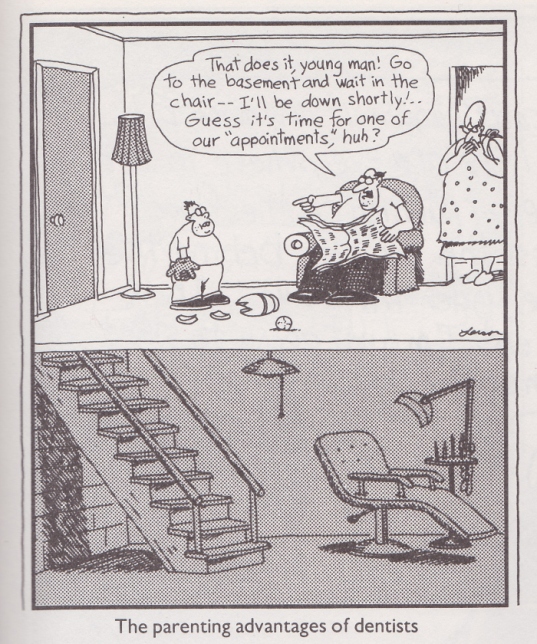 My dentist promptly referred me to an endodontist (not to be confused with an endoscopist who goes up your behind with a colonoscopy, or scopes other body cavities) who was near by.  THANK GOODNESS.  How I understood driving directions at that point is beyond me.  I made it to the endo’s office, filled out their forms (too many for sure), sat down and pitifully sobbed until they took me to one of the rooms to wait for the specialist.  Dr. Endodonist-big-brown-eyed-Harvard-graduate guy put me at ease … well, some ease, I was still in quite a bit of pain.  He did several tests on the tooth — tooth number 15 (a molar) to be exact and its surrounding sisters.

Here’s a tooth chart so you know where 15 is … because after all, you are wasting your time reading some blog and you might as well learn something.  Tooth numbers 1, 16, 17 and 32 are wisdom teeth AKA third molars so you may have had them removed already.  I did.  I got two dry sockets … but that’s another story for another day.  If you can identify your teeth by number you know way too much about them!

The sisters were fine but testing 15 made me climb to the top of the chair when he applied some smoking cold stuff to it.  He said I definitely needed a root canal. 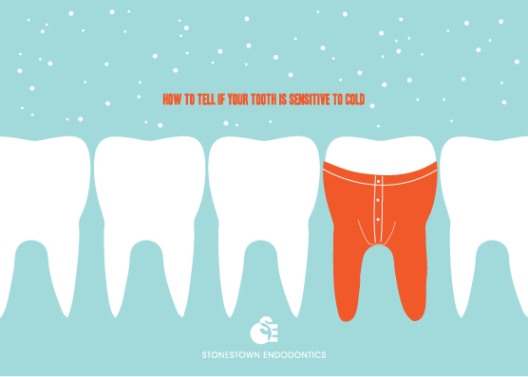 I didn’t want a root canal because:

Dr. Endodonist swabbed local anesthetizing goo on my gums, injected both short-acting lidocaine and long-acting marcaine all around the poor dying tooth AND gave me a shot in my soft palate.  Owwwwwwwww!  The local anesthetics worked, my lip felt fat, my tongue fell asleep and I started looking like I had a stroke on the left side of my face — BUT I was out of pain. 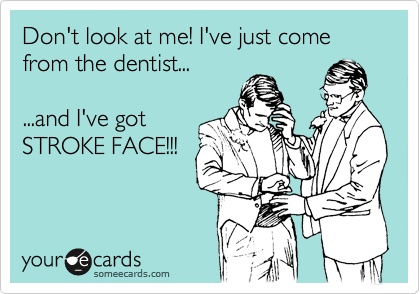 This is what your cat does when you’re not at home.  At least he’s taking care of his teeth!

To be out of pain is a blessing.  Thank goodness for modern dentistry and better living through chemistry.  My appointment for my root canal was booked the next morning with my husband driving me because I received an oral sedation medication called Halcion (triazolam) that worked beautifully.

If Halcion (triazolam) is given intermittently one hour before an appointment and then during treatment at intermittent intervals, it can work well for some people as a substitute for IV sedation.

I was able to keep my mouth open without much tiring and couldn’t care less what Dr. Endodontist did with my teeth at that point.  He worked quickly and again I was numbed up for another day to go home, sleep it off through the time warp of medication and local anesthesia … but most importantly be out of ACUTE PAIN.

So, my point with all this jibber jabber about pain is that neither the back and leg pain with fatigue of dysmenorrhea, nor the post-op hysterectomy punched-in-the-abdomen-achiness feel anywhere close to severe dental pain.

If I had to rate the pain I had with the dying nerve root pain, I’d give that pain an 11 … OK, a 42 on a scale of 0 to 10 pain scale.  I never want to go through that again. And when I tell people I had a root canal many reply, “Oh, ow, that’s awful … a root canal!”  Um, no, the root canal was not painful — it was the pain that led up to the root canal.  For the root canal I was numbed up nicely.  The root canal itself was painless as it should be.

It’s EXTREMELY futile to talk to people who have never had dental pain — like my mother-in-law.  Love her to pieces, seriously I do … but she’s also the type of person who never got stretch marks with her pregnancies, had painless births, had perfect angelic successful children, and had maybe one or two hot flashes taking an herb for a few days to relieve those couple dew drops of perimenopausal sweat that formed way back when she went through her mini pause.

When talking about the pain I experienced I might as well have told her I was wearing brown shoes or that rice is white.  In other words she could not relate and my pain would have no relational effect.  Now my lovely father-in-law, on the other hand, with his crumbly teeth could relate and exclaimed, “Oh no!!!!”  He and I have also shared stories about the horrible experience(s) we’ve had with debilitating vertigo. And just for the record I actually do have good teeth despite this experience … at least for now.  I floss and brush only the teeth I want to keep.  Honestly. 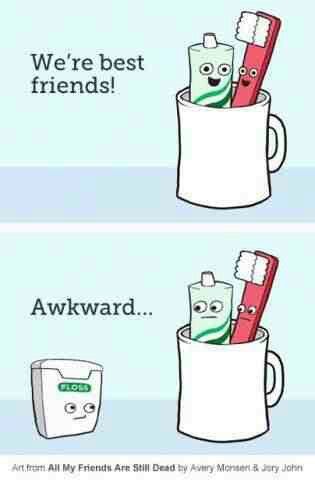 I don’t need an audience of sympathizers by any means, but at least try … TRY to realize dental pain hurts and that I would never make this shit up.  I also searched on Google coming to the conclusion a thousand hundred billion zillion people have actually had dental pain that hurt them tremendously!  Thanks to the internet I know I’m not alone in my pain. I don’t think I have ever been unsympathetic to people who have had dental pain, but after this experience I know I’m going to be a lot more empathetic.

The pic below would have been a nice certificate for what I’ve been through.